Reassembly is one of those games you find hidden in broad daylight, a gem in a sea of hyped-up fast-paced fps games.

And boy is it a gem. The kind that will suck you up for hours if you’re not careful. Currently, in its beta phase, some new features are now part of the game. Especially asynchronous Multiplayer.

The moment you are given control of your ship in this game a short tutorial quickly shows you the controls and basic mechanics. Then it tells you to kill anyone who’s a different color than you, that’s racism. Or is it space? Since it’s in space… I guess… for all I know it feels like your bunch of bacteria-fighting for control of someone’s stomach. Either way, Reassembly delivers a fun modular destruction sim where you’re the only person in your entire tribe with something very special, to begin with. 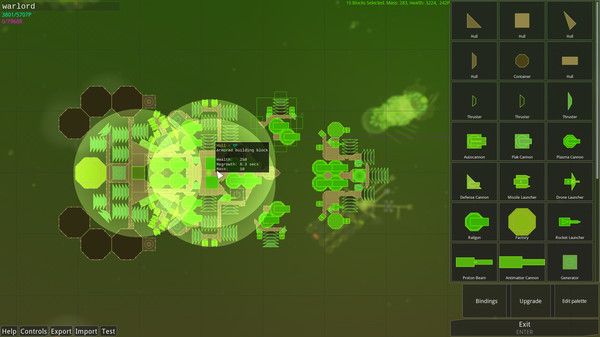 The game starts you off by choosing one of several factions (more if you have the mods) and plops you into some friendly field equipped with outer-space (or inner-gastric, I don’t know it) which fits dingy. Then you have to use your meager powers to gather purple floating objects called “resources” (creativity huh?) to trade in friendly factories for “credits” (again, creativity!). 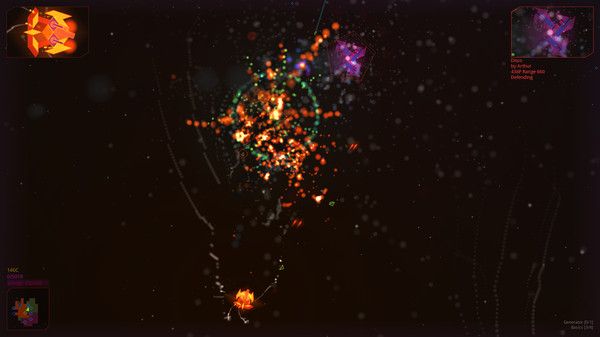 Materials typically grow near plants attached to asteroids/food globs located throughout the galaxy/belly. You can also get materials by killing black/white/red/yellow/etc colored ships. Then you’ll use the credits you earn from trading (aka, going near any friendly factory) to buy new parts with a higher point cap (allowing you to add more parts) to the ship your own.

About half of your time spent in Reassembly will be with the shipbuilder. They are very easy to use once you get the hang of them. Everything you would expect to need on a boat is here (as long as you unlock the right parts). You build around your core (the part you have to protect) with components ranging from armor to point-defense, to generators, to drone launchers. How about modern games and drones? Well, like real drones that break down really easily. Unlike real-life drones you can always spam them out and defeat your enemies.

One of the problems with the game is that the shipbuilder only allows you to upgrade the point-cap to 8000. This prevents you from building those giant ships shaped like different objects. But, don’t worry, there are more than a couple of mods that fix this horrible obstacle to holocaustic, wholesale, Hellenistic, and Hitlerism.

One thing the game gets wrong is that it tasks you with the arduous task of taking over every section of the galaxy/gut in your own color. This almost eliminates anything that is not your color. Some would argue that this transcends Mount and Blade: Warband levels of grindy conquering. Plus there are wormholes ({sarcastically} wormholes, right) scattered through the galaxy/gastric that inspire you to go to a completely different world (or upload designs you’ve built). 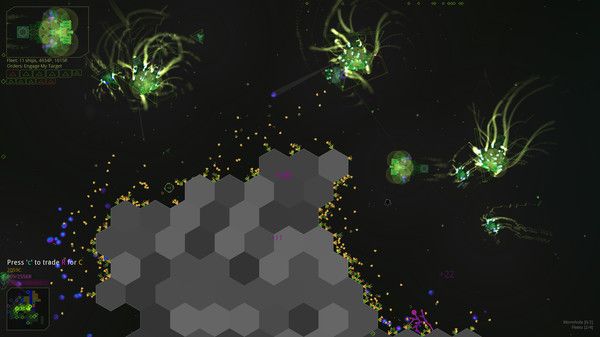 Despite these flaws, the game excels at letting you shoot everything and watch it crash. It’s very satisfying to watch an enemy capitalship get its primary weapons offline when you take them apart from the main body with a giant cutting laser, or any of the MANY weapons available in the game vanilla and mods.

One of the two main key elements. It has a very typical control for the genre, which can be floating, surprising, and needs to get used to.

The graphics in this game are highly customizable and can be absolutely gorgeous (I’m talking like, random positions of lights, shaders, flowers, etc.) or look like a flash game in n’ you who use tomatoes. But hey, that’s still fun. I personally played at potato level several months after a hard drive failure {shudder}.

All in all, this game is definitely worth your time. I bought it at full price, but you can wait for a sale (not that I’ve ever seen one of these). Even if you only have 15 minutes, Reassembly can satisfy that modular boat craving with its various classes, great possibilities and amazing boat builder. Then get this game going and have some fun taking over the galaxy/belly!

How to Install Reassembly For PC?