Star Wars: Knights of the Old Republic has held up incredibly since its release in 2003. Great writing meets a strong voice acting in a stunning, galaxy-spanning adventure.

Role-playing games like this have come a long way since 2003, and while a few moments made me long for some of today’s game-making twists, those examples were few and far between. A wonderful story with intriguing, universally concrete spiritual implications makes this a title worth returning to.

When you start you get to create your character with a set of separate heads and all genders to choose from as well as your class, starting statistics and abilities that you can hover over or something (by now I do not remember) so it will tell you what they are for, so while this may be great for some people it is well explained. 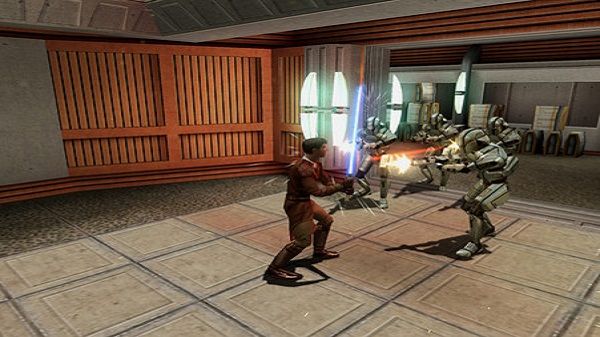 You play as a soldier and start on the Endar Spire cruiser. The action takes place ~4000 years before our canon Star Wars movies. He works for the republic. You wake up and learn basic gameplay mechanics.

You’re a crew member of a republic ship called the “Endar Spire”, after creating your character you wake up to find that your ship is surrounded by Sith forces, you must use your class-specific skills to slice, pew, then sneak past the Sith soldiers. 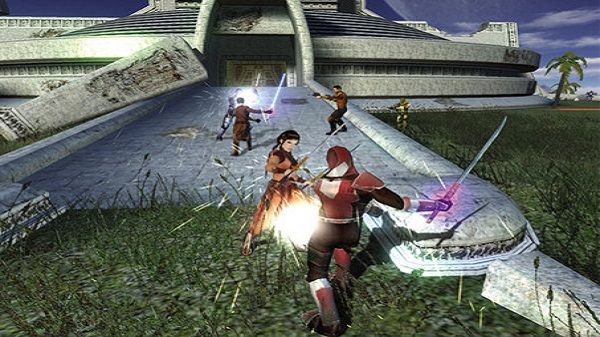 As you progress through the game there are probably HUNDREDS of mini-stories you encounter, including 9 different characters with their own unique backstories. When it comes to story time, few do it like KOTOR. For my fellow Star Wars Junkies, the game takes place during the “Old Republic”, not long after the Sith Wars (or Jedi Civil War). The lore in this game is pretty good, you get to visit Kashyyk, Korriban, Tatooine, Yavin, Manaan, Dantooine, and a few other KOTOR-specific planets.

Well, about the gameplay because I said I didn’t enjoy fighting in this game when I was younger… the game has an active pause and it kinda plays like a paper RPG with many different stats, rolling your chance to hit a target etc. This could be considered a con if you’re looking for something like a Jedi Knight game but it works really well here and makes the game more strategic and all your skill upgrades give you satisfaction when later it comes in handy the victory. You fight with up to 2 partners besides you at the same time and you can choose skills from them as well, just make sure to disable auto-promotion. 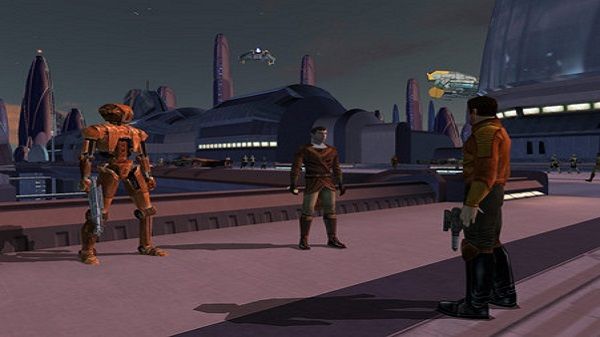 You can play melee in this game right from the beginning in the form of a vibroblade. I don’t want to spoil it for you so I’ll just say that there are at least 4 different fighting paths and only one of these is gunning people down. I wouldn’t say sniping people is boring: there are also plenty of abilities and weapons for that! If you play you will understand because if you want to go melee you will have to choose one of 3 options.

Overall, not much to say about the game and I don’t wish to spoil it. If you’re a die-hard Star Wars fan and haven’t played KOTOR yet, then something is seriously wrong with you. Stop being a nerf shepherd and play this amazing game! I can’t speak for everyone, but this remains one of my favorite Star Wars games, even with various bugs while running the game, I still plan to play through the game once via steam.

The game should take about 25-40 hours easily… depending on how easily you sidetracked. if you’re a completionist like me you’ll probably be looking closer to 50 hours, and then if you want to replay to help/screw the NPC you screwed/helped, you can easily double your time spent.

How to Install Star Wars: Knights of the Old Republic For PC?