Grand Theft Auto 3 is one of the most important video games in gaming history as developer Rockstar Games pioneered third-person open-world gaming in a fully 3D environment. Yes, there were other open-world games that came before GTA3 like the cult classic Shenmue (1999) but we all know how that series turned into a huge disaster.

Honestly, this is also my least favorite game in the Grand Theft Auto series in terms of story, writing, and gameplay. This review will focus on giving you a recommendation on whether to buy this game or just skip this one altogether and go for the ultimate game instead. I will start by expressing my thoughts. I used to love this game and played it for months but it seemed too hard to go back. Maybe it’s because I’m a spoiled brat xD. 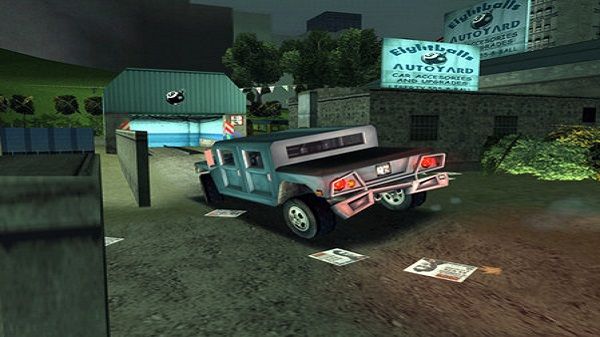 GTA III, a game developed by Rockstar North (Edinburgh, Scotland), was released in October 2001 for the PS2 and was later ported to the PC in May 2002. Now, I’m sure everyone is familiar with the concept of GTA games, so I’ll follow along. It was the first game in the series to use a 3D engine. The game itself was set in a fictional place called Liberty City, which supposedly resembles New York. Thanks to the engine, the city is dynamic, has a 24-hour solar cycle, and the weather changes.

During the game, you will play as Claude, a dumb hero. You are betrayed by your girlfriend during a bank robbery, which results in you being arrested by the police. You run away and seek revenge.

In the beginning, you will work for the Mafia, helping them with a rival family and the Triads. Then, after they betray you, you start working for the (Japanese) Yakuza. Finally, you get your revenge on your girlfriend, who is a member of the Colombian Cartel. But to do that, you fight between the Yakuza and the Cartel. 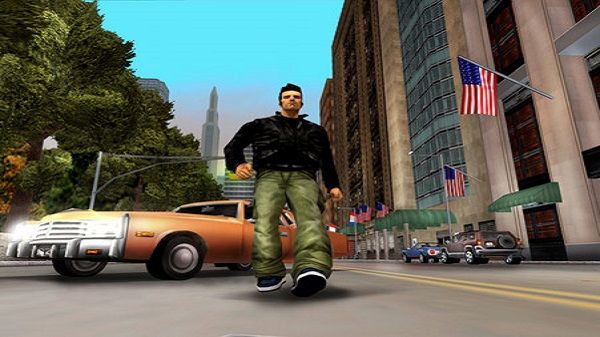 At the end of the game, 5 of the 7 gangs in total will turn hostile – attack you on sight. This can be very annoying because some gangsters have bullets that can blow up your car in 2 shots. For comparison, until the end of the game in GTA Vice City, you only had 1 gang that would be hostile towards you, and when you were in GTA San Andreas, you could completely eliminate all other gangs.

Also I feel that Rockstar didn’t care much about the story, because in this game your hero is taking revenge on everyone, so many gangsters will be against you.

The presentation is fantastic, the opening scene is beautifully done, and each mission is fully voiced with in-game scenes. The developers made sure that the world looks as realistic as possible. The game has a lot of detail and life in the day and night and the weather cycle. NPCs also react differently to you.
The graphics are amazing and exactly the kind you’d expect from a blockbuster video game released in 2001. The graphics are better than Max Payne but not as good as Halo Combat Evolved but that is to be expected with its large scale. The map is large and consists of 3 different islands. Completing missions to explore each area is mandatory (you can use this by using a flight cheat anytime after starting the game). The audio is decent and the radio feature is a nice addition.

The game mechanics are definitely a little long in the tooth at this point, but they’re still a lot of fun. The smooth, slightly floaty driving mechanics that are a hallmark of the 3D GTA games make their debut here. At first, the driving may seem a little far, because I don’t know any other driving game that works quite like the GTA games.

The arrangement is a little slow, but once you get into it it’s a real blast. Of course, the ability to drive the vehicle depends a lot on what you are in at any given time. It has to be said that there are no motorcycles in GTA III, which for me is probably the one aspect of the last games that I have missed the most here. There are also no helicopters and only an airplane (very difficult to control). That said, the variety of vehicles available here is great for the game, and I feel that the slightly limited selection of vehicles can be forgiven since we are talking about the first full 3D GTA entry.

GTA3 introduced and perfected gameplay that the franchise still largely maintains. There are a series of story missions that you go through to unlock other parts of the game and see what happens next in the story. Otherwise, you can ignore the story and explore the city at your leisure. While you are doing activities like driving a taxi cab or looking for hidden collectibles. 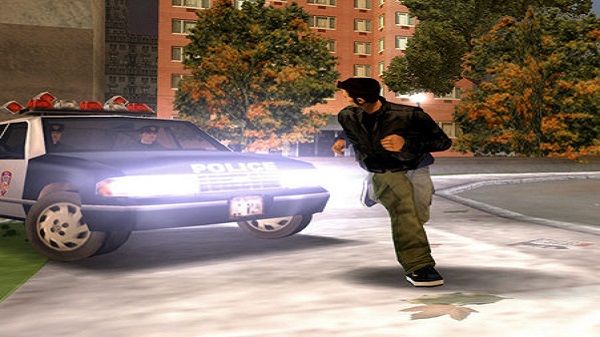 This core gameplay pipeline of missions, moments, and collections with a freely explorable open world was unusual at the time, and people were blown away by how impressive the whole experience was. Also though because there have been so many games based on it, it sometimes feels like it’s unrecognizable compared to the crowd of sandbox games that followed.

DRIVING: A major part of the game is the driving missions, in fact, I’d say that most of the time all you’ll be doing is driving and shooting enemies and the driving part is just “okay” I guess? I personally hated it when the car flipped every time it flipped or hit multiple times which made some missions much more difficult.

COMBAT: The combat hasn’t aged very well with this one like most older games. If you’ve never played games from the early 2000s, you’ll have trouble adjusting to GTA3. The shooting is weak and strange, there is no proper shooting system. The aim is bad. The difficulty is sometimes unforgivable, especially during the later missions.

Comparison with other GTAs

Unlike other GTAs, most of the game is based on the use of cars:

All the games of the GTA 3 era were tough, but what set GTA 3 apart from the rest was that you couldn’t crash. In other GTAs starting with Vice City, you can hide behind any cover. Most objects will cover your friend completely when you’re crouching, and when you start shooting, your character will rise slightly above his cover.

Another thing this game is missing is a map. There is only a small map, but you can never see the whole map. The city is divided into 3 islands, and every time you reach a new island, the game will show you Pay’n’Spray, and Ammunition icons, but only for the first few missions, then they go away. So if you’re going to play it, you better forget about the necessary spaces.

Also, you can’t puncture the tires or break the car windows. You can’t even damage a car with a baseball bat. These features started in Vice City.

Actually, GTA 3 is old now, but it is one of the best games of 2001. and if you can get used to its graphics, this game is still a very fun game. Overall GTA 3 is a good game, but it hasn’t aged well since 2001. It’s a revolutionary game and I won’t deny its impact on the gaming world, but I highly recommend players Download Vice City or San Andreas.

How to Install Grand Theft Auto III For PC?