This could be the best Star Wars FPS / 3rd person ever made. Though old, it still has a good mix of puzzles and action. He will never forget the first time you play it. Lightsaber tracks in walls, wall running, and story all ahead of its time. 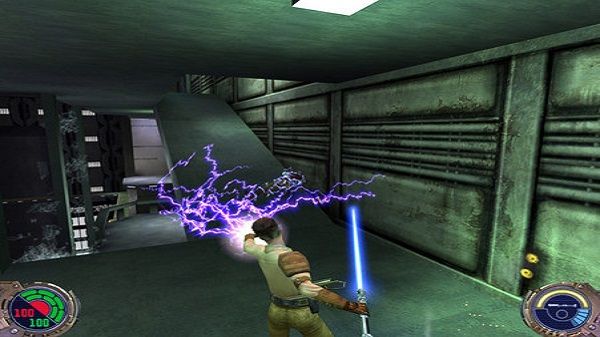 The levels themselves are very very long indeed with just scattered checkpoints, and sparsely scattered at that. You’ll be using the Quick Save function a lot, I believe. This is good because it gives you, and the game a chance to craft some really interesting levels and locales, but as I say, on the other hand, saving is important, and sometimes you will be scratching your head if you missed the least something necessary to move on.

It’s not a huge departure from what you’d expect from Star Wars, and there’s absolutely nothing wrong with that. Kyle Katarn is a very likable character. 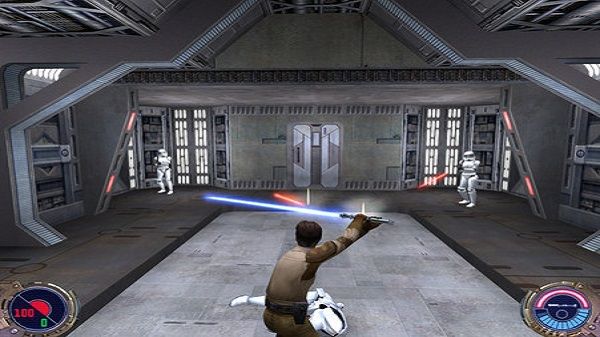 The story begins with Kyle and Jan heading to Remnant Outpost to investigate a potential threat. After discovering that Remnant has been experimenting on other prisoners, a tragic event causes Kyle to return to the Jedi Academy to become a Jedi again and stop this new threat. Despite its Legends status, I found the story very good. There are even a few familiar faces that pop up during the story, including the franchise’s most popular duo.

This is where the game really shines. A lot of people have complained about not getting a lightsaber until after the early levels, but I never saw a problem with it. I found that there was a lot of fun to be had in shooting Stormtroopers, but the game is much better once you’ve got a lightsaber and Force powers.

Mowing up Stormtroopers and villains is incredibly satisfying, and duels with Dark Jedi are doubly satisfying. Once you learn the ropes of lightsaber combat, it feels very fluid and at times cinematic. The levels and puzzles within them can sometimes be a bit tricky to find, so you may need to move around; I used the walkthrough maybe 2 or 3 times throughout the game for certain puzzles I got stuck on. 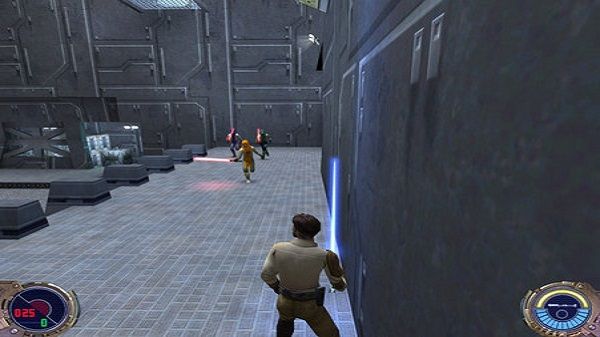 The gameplay remains very similar to the previous games; a first-person shooter with lightsaber combat is thrown in a few chapters into the story. I’ve read a lot of praise for the lightsaber combat in this game, calling it a solid Star Wars game experience, but I have to admit that, at first, I wasn’t impressed.

The true dismemberment, which was activated by a console command, was fun, but the quick kills by the bosses weren’t much, especially when I seemed to be able to do a lot of damage with my lightsaber. But after reading a bit about combat in the instructions, it finally clicked for me, and I ended up really enjoying it, to the point where I barely used another weapon in the final levels. Cutting up Stormtroopers is just so much fun.

The game may be from 2002, but the graphics are still superb. The only thing that doesn’t really catch on is the lip sync, but it’s easily overlooked, as the cutscenes are short.

The voice acting is excellent, with Billy Dee Williams himself reprising his role as Lando Calrissian. The soundtrack includes several classic Star Wars clips, so obviously no complaints there. The audio effects are nice too.

Overall – if you want a first-person shooter with a bit more flavor, get it. Star Wars affinity isn’t necessary – I’m not a huge fan of the franchise (especially after Disney turned it into a creative factory farm, fully suited to milking as many dollars as possible before it dies), but I still enjoy it very little.